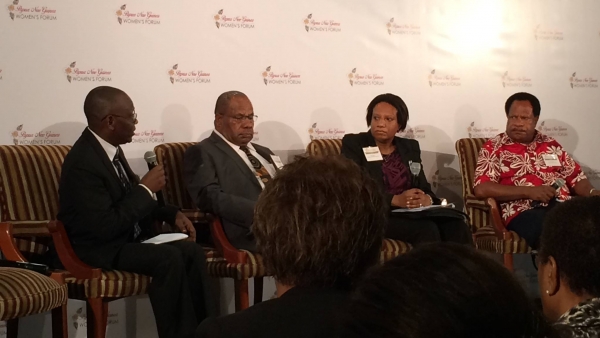 A Beacon of United Purpose: Kate Spacek Reports from PNG

The visions and plans for the American Arts Incubator are becoming reality! Kendal and I have arrived in Papua New Guinea!

After spending the better part of 18 months working alongside my colleagues at ZERO1 and with the U.S. State Department teams in Washington, D.C. and Port Moresby, we are absolutely thrilled to arrive to this beautiful place halfway around the globe to start the true work.

Amidst intermittent power outages and torrential rains blowing sideways, a crowd of over 300 faces gather in the Crowne Plaza ballroom in Port Moresby for the 2nd Annual Papua New Guinea Women’s Forum. The event examines seemingly every major social issue as it relates to gender equality – international policy, health, education, gender-based violence and sex crimes, workers’ rights, financial inclusion, family planning… The list is daunting, and as an ignorant outsider, beyond overwhelming. A tug on one thread triggers a domino effect of complicated knots. There exists some level of reassurance, though, in realizing this Forum is not just about talking; each discussion leads to a breakout session, wherein interested attendees collaborate to develop action items. Underlying these informal, real-world strategies is the notion that continuous small steps lead to sustained transformation.

Attendees’ expressions range from wide-eyed eagerness to ultra-hesitant shyness, from anger and grief to optimistic hope. Local, regional, and international representatives of NGOs like UNICEF are here. The principal of a high school on the PNG island of Togoba is here. The Prime Minister’s wife is here. Local male advocates against domestic violence are here. Ambassadors, Secretary Generals, UN Officers, Ministers of Education & Community Development, World Bank leaders, and some of the highest ranks of the U.S. military are here. Press and media officials from Australia and other regional outlets are here. And… the more “fortunate” women of Papua New Guinea are here. 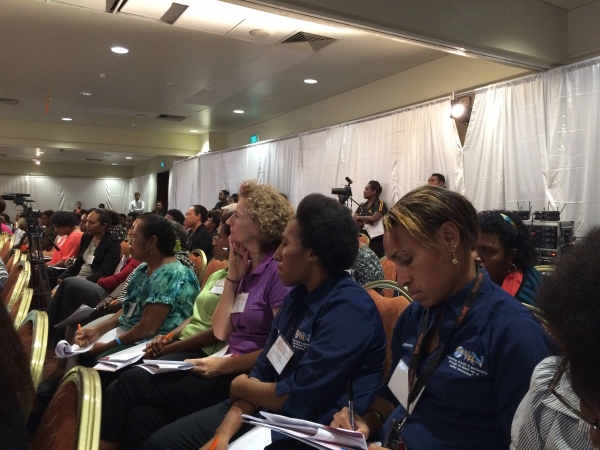 For almost every one of these faces to be present, an airplane was required. Port Moresby is an island within an island. Although Moresby is the capital city of Papua New Guinea, topography isolates the city of nearly 350,000 from the other 7 million of its people. Sharing the second largest island in the world with Indonesia, PNG is a lush yet harsh landscape of mountains, with multiple peaks reaching more than 14,000 feet above the surrounding sea.

An understanding of the topography is key in absorbing what I am about to share:

Although the specific numbers vary slightly depending on the source, I am astounded to discover that over 800 distinct languages exist in Papua New Guinea; this represents 20-30% of the world’s languages! Each of these languages represents a unique culture, a unique way of living. In the past hour, Kendal and I have joined four or five different circles of Forum attendees. Within each circle, locals exuberantly share with me the name of the village or province they call home. A bit of friendly competition hints at age-old divisions ingrained in this society. 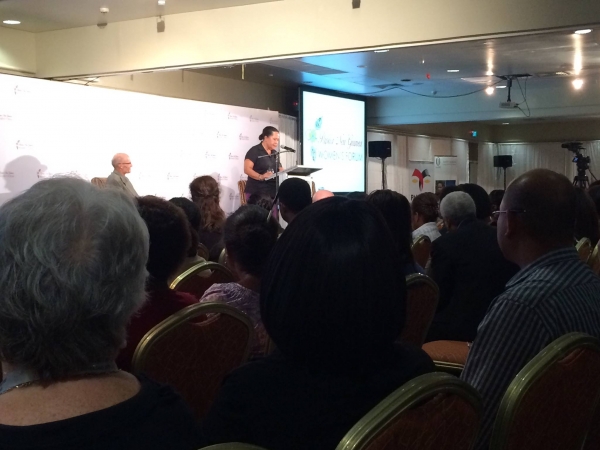 One man pleaded with Kendal and me, “we need people like you from the outside to collect information – to go from village to village and figure out who exactly lives in this country, to explain to each village the importance that we work together!”

He responded to our looks of confusion right away. Pointing to his friend standing next to me, he said, “I cannot approach his people with requests. His people cannot come to my village to collect information. Our ancestors are enemies.” We asked what happens when a man and woman from different backgrounds procreate. “That baby, with its mixed roots, that baby will be able to work with both villages. But my friend there? Me? No. We cannot be the messengers. It’s impossible. We need outsiders to understand this. We need you all to be our united voice.” His wild hand gestures and desperately intense eyes amplified his guttural passion. “You must realize that for us, the fact that we’re even standing here talking to people like you, this is huge, so huge.” The rest of the circle nodded fervently in agreement.

This 3-minute intimate glimpse of his realities peeled away only the most superficial layers in my understanding of this hugely complex cultural context, and the navigation required to address PNG’s endemic and intertwined social crises. The highly hybridized collection of human beings surrounding me, though, serves as a strong beacon of united purpose. And with that, the power’s back on and I can upload these words!

For more on the topography, population and languages of Papua New Guinea: