“I divorced my husband because he was married to other women,” proclaimed a woman in a matter-of-fact way in what was the very last workshop of the very last day of the PNG Women’s Forum. That statement was both a declaration of her independence and confirmation that she was empowered to take charge of her life and make her own decisions. The workshop, Turn Your Passion into a Business, was led by Marga Fripp, the president of Empowered Women International, a not-for-profit organization whose mission is “to create jobs and entrepreneurial opportunities for immigrant, refugee, low-income, and at-risk women in the Greater Washington DC Metro Area.” The forty-two women who filled the room each voiced their passion, which was either already a business or something they can turn into one. Within the two and a half hour-long workshop, women exchanged ideas and encouraged each other to be more self-reliant – a common thread throughout the entire forum. 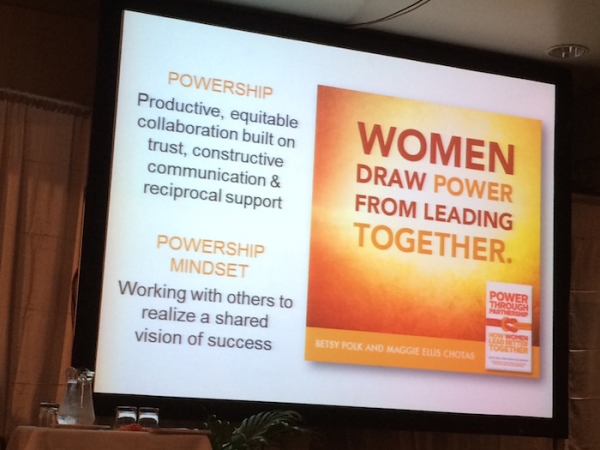 Three days before, Kate and my first introduction to the forum came by way of sitting in on one of the session’s preparation meetings to get an idea of how the sessions are organized. This one was titled, Decreasing Barriers to Education for Girls, with the conversation focusing on the question, “has free education improved girls' enrollment in school and education quality?”  The panel consisted of the principal of a school, the minister of Education, and a representative of UNICEF, among others. While free education seemed like a no-brainer, many obstacles associated with that privilege negated its intended purpose. For example, free education meant more students, more mouths to feed, more space necessary for more classrooms, more dorms to house those students and more teachers. As an increase in the operating budget was not part of the plan when free education was offered, the overall quality of the educational experience has suffered as a result. This is indicative of the complexities inherit in finding practical solutions for the issues facing the women in PNG. The forum was lively and ripe with such discussions.

Turn your passion into a Business workshop with Marga Fripp. Photo courtesy of the Artist.

I was honored to participate in one of the last sessions in the forum, Developing Male Advocates Against Gender Based Violence (GBV) – How can PNG men help each other respect women and be positive role models for young men.

Eddie Aila, Founder and Head Trainer of Warrior Culture – a male advocacy group – moderated the panel. He started by illustrating how the stories around GBV change with time. “Mary is beaten up by John, Mary is beaten up by her husband, Mary is a battered woman.” The male perpetrator is often forgotten. This session was pivotal in that most of the focus had been on the women – providing care, a safe space and medical attention after the abuse, but the focus of this session was the elephant in the room, the root of the problem – the men. At a heated breakout session that followed, a Men’s Forum – a gathering of men from all 22 provinces – was the top recommendation when moving forward to address issues around GBV. 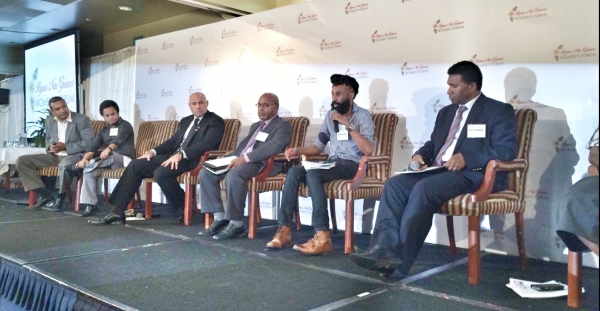 Kendal speaking at the Developing Male Advocates Against Gender Based Violence.

“Smoking in the lavatories and chewing betel nuts are strictly prohibited,” was what I heard over the PA system as Kate, the program manager for the American Arts Incubator and I took our seats on the Air Niugini flight in Sydney. That’s when I knew that Papua New Guinea was fast approaching. Finally! This was the last leg of delays, missed connections to rerouting, lost then found luggage, disappearing bookings to repurchasing tickets, and a lovely 24-hour layover in Sydney.  The smiling stewardess on the monitor in front of me seems to say, “relax you are almost there!” which brought me a bit of comfort.

Having never been to PNG before, I didn’t know what to expect. So, when I was jolted awake from deep sleep by the rough landing, I strained to catch glimpses out the windows from my isle seat. I saw a thick, lush, green and hilly landscape peppered with dirt roads and houses outlined by beach and ocean. For a split second I thought I had landed in St. Lucia, my birthplace. All these islands look alike but the similarities didn’t end there.

The relaxed, no rush attitude famously coined as “Island Time” was evident when the two attendants manning the Visa Upon Arrival counter finally sauntered to their posts after observing the growing line from a distance. Their calm and friendly demeanor was infectious and served as a reminder to slow down and leave the stress behind. Bobby McFerrin's, “Don’t Worry, Be Happy” came to mind. All that, however, was shortlived as we took in the atmosphere from the window of the van through our jet lagged eyes. 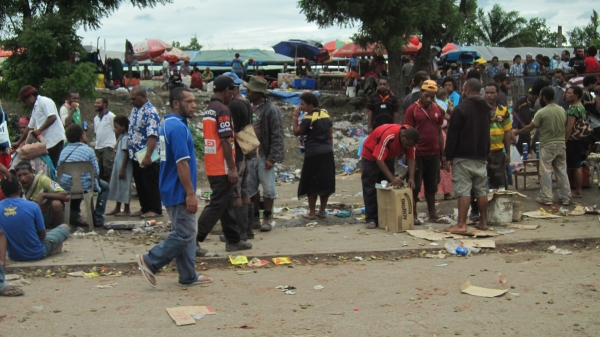 People in the streets of Papua New Guinea. Image courtesy of the artist.

We saw people going about their daily lives along the mango and banana tree-lined streets between the airport and our hotel. As safety is of the utmost importance for our wellbeing, it seemed to be all doom and gloom as we were briefed on the Do-Nots while in PNG. "No getting into cabs or public transportation" and "no walking around alone in certain areas," are just two examples as car-jacking and violent robbery are commonplace. There are gates around everything, even our hotel, reinforcing the need for a high level of security, not to mention an official security briefing planned by the regional security officer on our second day. This will be more challenging than expected to navigate, but I'm hopeful our participation in the Women's Forum will help us begin to make meaningful personal connections.

Then there are the people. The few locals that we interacted with – the waitress at the restaurant and the people at the reception desk at the hotel – were beautiful, soft-spoken and friendly. Not in the I-am-friendly-because-I-work-in-hospitality way, but genuinely friendly. They were very nice and open to answering personal questions from a couple of inquisitive Americans and more than happy to share the nuances of the many languages and cultures that make up PNG. We were even taught a few phrases in pidgin - Nem bilong mi Kendal; My name is Kendal. That alone made up for all the negatives and was a great way to end my first few hours in PNG.