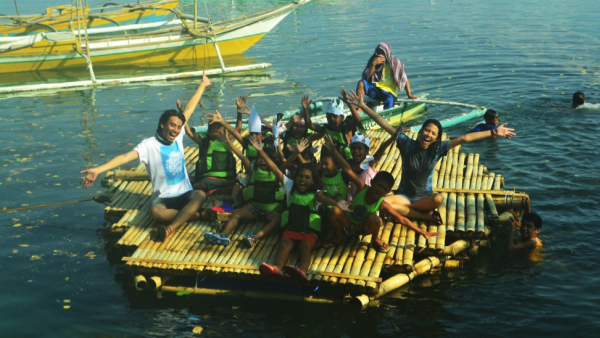 The American Arts Incubator team at ZERO1 received a message from Aliana Juson of community project group, Suyac Advocates, in the Philippines to offer insights and developments on their project, Floating Eco-Resource Library.

For the American Arts Incubator project, my co-proponent Keith Cari-an and I initially wanted to create the multifunctional floating eco-resource center structure right away. However, due to our restricted budget, we decided to focus on programming instead. We decided upon activities that we, and the community, aim to showcase in the future eco-resource center. Our main principles are about spreading information on marine conservation and environmental health through various activities, which include read-aloud activities, interactive discussions, performance art, and film screening. By starting with the programming instead of concretizing the center itself, our hope is to gain attention from more prospective funders.

We decided to use the typically-celebrated event in the Philippines during the month May, Flores de Mayo, as our starting point. We weren't going to have just any ordinary Flores de Mayo, because we decided to make the costumes out of recyclable materials! Participants as young as 3-12 gathered from the area, thus, Flo-recycle de Mayo. The tradition of Flores de Mayo, or Flowers of May in Spanish, dates to Spanish colonization and is devoted to the Blessed Virgin Mary. As a country known for being predominantly Catholic, it is quite understandable that the community in Suyac encouraged us to do it.

The community in Suyac was nothing short of helpful, welcoming and cooperative. In addition to community members, we were put in touch with Visayas Sea and Earth Advocates (SEA) Camp, who are also funded by the U.S. Embassy of Manila and organized by Save Philippine Seas. We were then connected to our co-participants and friends, Kim Casipe, a fourth-year Biology student, Robert James Lesterio, a Communications graduate, and Christine Thel Geollegue, a second-year Law student. 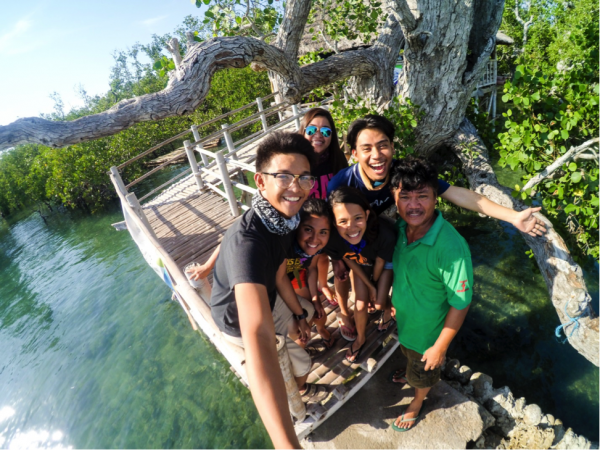 Soon, we were busy building the Eco-Resource raft! Kim and Robert helped purchase the additional 55-gallon drums needed for the raft and took beautiful pictures of the Mangrove forest while she was there. Thel helped make decisions when Keith and I were too exhausted to function, and Robert helped the kids cross the part of the mangrove forest when it was high tide so they won’t get wet. Their acts of volunteerism were touching! 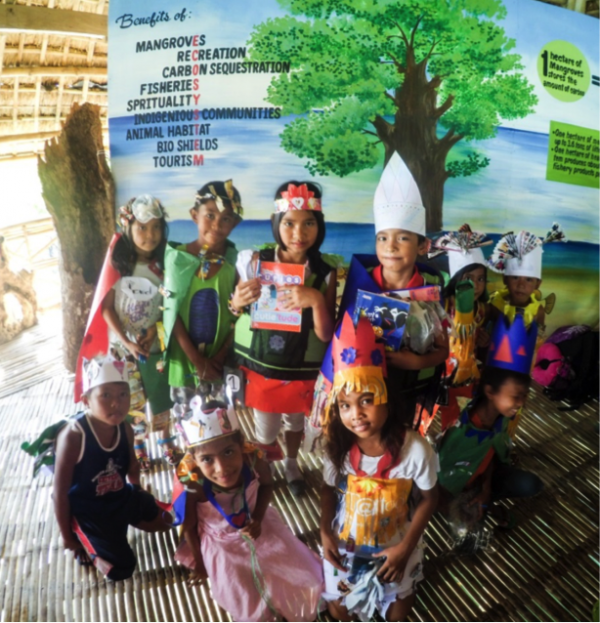 For the arts and crafts activity, our team and Catechesis teacher, Ross Dueñas served as facilitators for the five groups.

My group, who later won first place, looked for king and queen costume styles by looking in an old catalog. For the recyclable materials to be safe and clean, the members of my group volunteered to wash the materials and to dry them under the sun.

Since our focus is on environment health, it was important to promote eco-friendly acts. During morning snacktime, we asked the kids to bring their own glasses for juice. After arts and crafts activities, we all took part in cleaning the surroundings by getting rid of waste like pieces of paper and plastics we didn’t need for the costumes and disposing of it in their appropriate receptacles. Even mothers helped ensure that our work areas were clean. 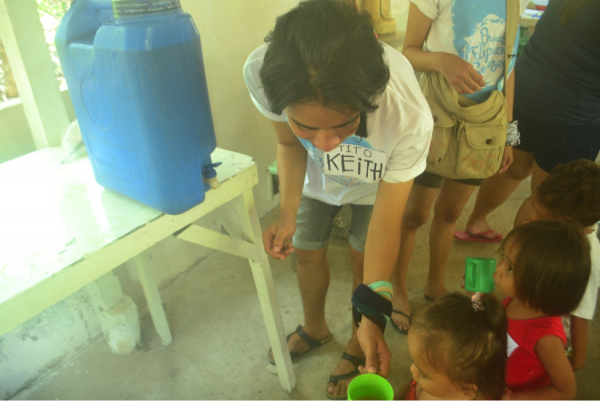 Several of the four qualities that American Arts Incubator artist, Felipe Castelblanco, saw in the Filipino culture were the same qualities that I saw in Suyac community. These are the reasons why I never, and will never get tired of traveling two hours north and crossing the ocean just to help them as much as I can.

In more than a month of visiting Suyac almost every weekend, I can say that they have strong community values that they are proud to showcase especially to tourists. I have seen how they, especially the members of Suyac Island Eco-Tourism Association (SIETAS), responded to the possibility of having a floating eco-resource center in their community. When they first heard of it, they were soliciting ideas on how it should look like and what materials should be used. 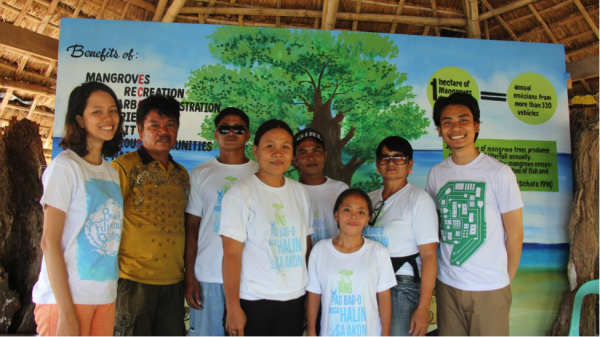 Keith and Aliana with the members of SIETAS.

2. A strong sense of togetherness

SIETAS was formed out of our immediate and collective sense of frienship. They were often, if not always, laughing, and have a positive outlook in life. They share that positivity with one another! This positive outlook in life that I see in them is one of the many reasons why I believe that the Suyac Floating Eco-resource Center will succeed. 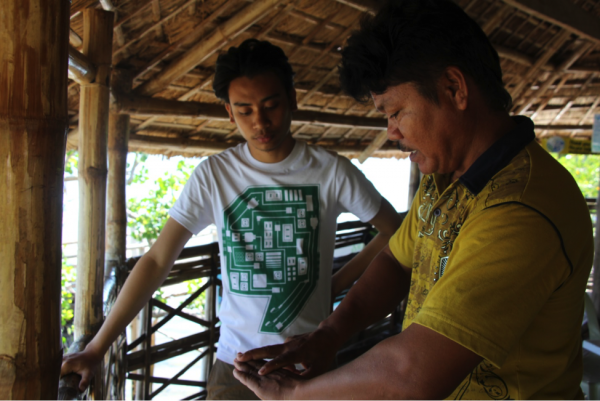 Not only can they identify the seven species of Mangroves, they are also thankful to the Mangroves because those were primarily what saved them from massive destruction from the Typhoon Yolanda (Haiyan) in 2013. To me, those century-old mangroves are just like SIETAS—willing to sacrifice for the good of all people. They sacrificed their time just to talk to us during our meetings with them and welcomed us in their homes even if they don’t have much. Their resilience is so inspiring. 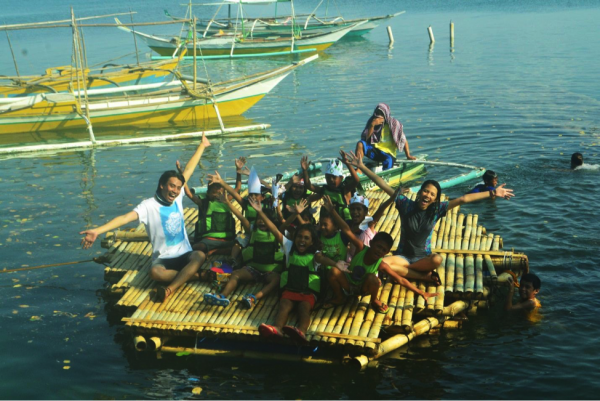 Keith and Aliana with the Florecycle de Mayo kings and queens in the raft, Photo by Robert Lesterio.

We look forward to what continues to be a result of our art-making and community bridging around environmental health.

Our next activity will be documentary screening for the teens in the community where the reflection part of the activity will be held in the raft, surrounded by the Mangroves. How cool is that?