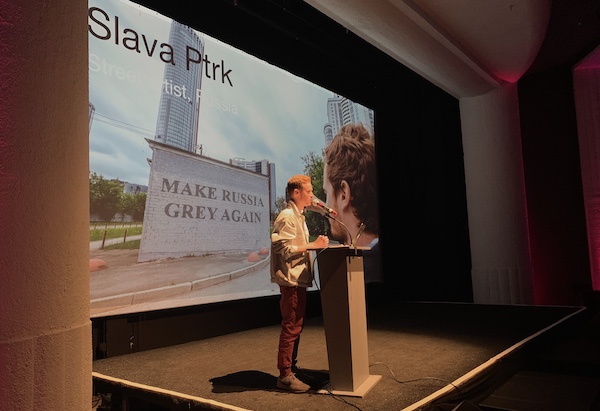 ZERO1 hosted Moscow-based street artist Slava PTRK from October-November 2019 through the CEC ArtsLink Fellowship. During their residencies, Fellows have the opportunity to research and develop community-based projects, present new art practices from their regions and spark collaborative projects with U.S. artists.

What were you researching in San Francisco as a CEC ArtsLink Fellow?

The main topic of my research was the theme of police violence and the relationship between society and the police system in the United States. For this purpose, I met with people from social justice organizations, with artists and curators, and also independently studied this subject on open sources on the Internet.

In addition to the main topic, I got acquainted with local street and contemporary art, and tried to understand what life in the United States and in California in particular is like. I took up a very extensive and complex topic, so while in residence I tried not only to get specialized information on the topic of law enforcement, but also to get acquainted with the American lifestyle and way of thinking in general.

What was something surprising you discovered as a result of your research?

I just started my research, but I realized that the American law enforcement system and their Russian colleagues have much more in common than I thought. This surprised me - for all the differences between these two countries and the two systems, they really have many common problems and ambiguous moments.

What did you notice about the street art scene in San Francisco that's similar to or different from the one in Moscow or Yekaterinburg where you're from?

I was interested and curious to discover Latin American style murals – I’ve never seen anything like it. Many of them are made in bright colors and dedicated to famous people from the spheres of culture, science, politics or made in memory of victims (victims of war, revolution or police brutality). I have collected a quite big collection of photos of such works, and I will try to use them as inspiration in my future projects.

In San Francisco, there are not so many façade-sized murals, which is currently very popular around the world. There are more Latin American murals and classic graffiti works hiding in small alleys between major streets. At the same time, I still managed to find several large high-quality drawings on the façades of houses in the city center, made by famous American and foreign artists.

This is quite different from Russia - our street art is not like Latin American style murals (I see Precita Eyes Muralists doing some in this style), we use a smaller palette of colors and often work illegally, which affects the quality of the details. Also, our classic graffiti (where you write your name on the wall) is different from California - here it is richer, more diverse, brighter and more interesting.

Did you learn or experience anything during your time in San Francisco that you'll incorporate into your future practice?

Before this trip I’d never had such a long and deep immersion in the culture and life of another country. And although my English is far from perfect, I still managed to learn a lot about America and the people living here during my stay in California.

In addition, I improved my skills in independent work and how to self-organize my workflow, research schedule, meetings and much more. And, of course, all of the public speeches, lectures and meetings were very interesting and useful for me. I was happy to test myself (in presentations) and meet a lot of interesting people (and have the chance to work with them). It was an invaluable and important experience, now I will feel more confident during foreign and Russian trips.

What was a memorable moment of cultural exchange you experienced during your time in San Francisco?

My host Shamsher and I conceived the idea of making a drawing on the folding gates at the entrance to the Gray Area. A consideration was the pre-existing graffiti from local graffiti artists that was already there. My idea was to make one of the works from a series of recursions - in this case, I don’t destroy the original image on the wall, but reproduce it with maximum accuracy, copying it inside itself, creating the illusion of depth and volume on a flat surface.

However, the graffiti artist, the author of the previous image, did not understand my idea and was against any changes to his piece. In this situation, Shamsher, some Gray Area staff, and I had to use all the diplomatic and persuasive skills we possessed. The author of the previous piece was furious when we didn’t wait for his answer since I had to leave the city in a couple of days, and I had to begin to make the new work. He made threats, promised to restore his work to the same place, and demanded a check from me as financial compensation. However, when the artist came the next day to paint over my finished piece, he saw that I hadn’t destroyed his drawing, but saved his name and upgraded it. It radically changed his attitude to me and to the whole situation.

We went from aggression and threats of physical violence to offers of friendship and benevolence. In the end, everything was good - I made the work, and the author of the original drawing expressed his respect and gratitude to me after seeing the final result. It was an interesting experience – I’ve never before had such long discussions with the project team to find the best solution in a difficult situation like this, as well as to conduct such unpredictable and intense negotiations with the conflicting side. Usually I either ignore such problems, or solve them in an aggressive manner, going into open conflict. I am glad that in this case we have gone the way of peace. I can say with confidence that this experience of peaceful resolution of the conflict and finding a compromise will affect my future projects. 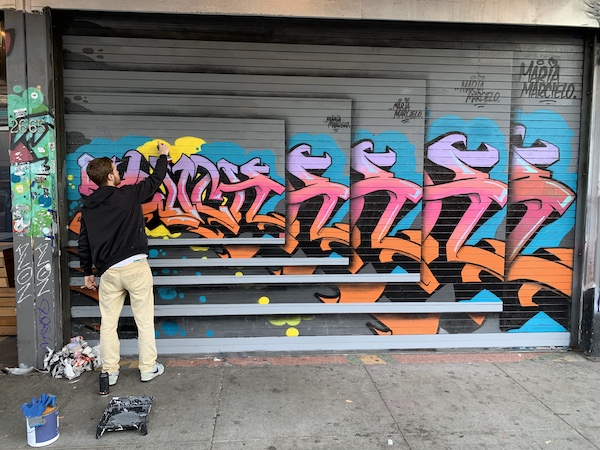 I just would like to say thanks to Shamsher and Maya at ZERO1, Gray Area, and CounterPulse for all the hospitality and friendliness with which you met me in San Francisco. I am very glad that you were my hosts and I hope, no, I’m sure that we will do a few great art-projects in the near future together.