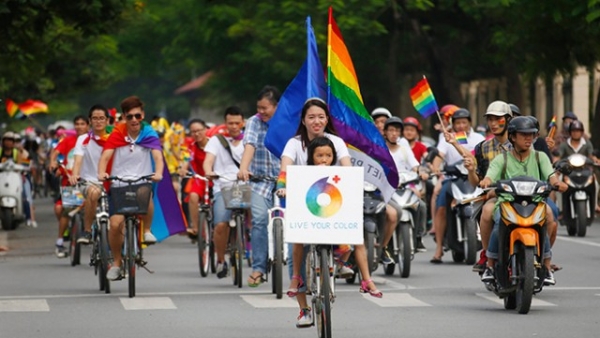 For me, as a Queer Vietnamese American Woman in the diaspora, the issue of LGBTQ (Lesbian, Gay, Bisexual, Transgender, Queer) rights has always been vital to my survival and existence. I have had to navigate my queerness in the context of my identity as an American, as mixed race, and as a transnational Viet Kieu (overseas Vietnamese). When I came out in the early 90s there was no one to look to in order to see myself, in the US or in Vietnam. In the U.S., visibility of LGBTQ community was sparse and there certainly weren’t out queer Asian Americans, much less Vietnamese people that I could relate to. I took it upon myself to be as visible and out as possible.

Over the years in my travels to Vietnam, I have always sought out LGBTQ Vietnamese. Over a decade after coming out, I had to navigate my queerness delicately when I traveled. After my trip to Vietnam in 2003, I wrote a bit about my search for folks like myself. Here is a link to the soundcloud from the Whitney Biennial SAIC Free radio that details my story.

Twenty years after coming out, I remember sitting in a cafe in Saigon in June of 2013, with my Viet Kieu Queer friend celebrating the overturning of DOMA (Defense of Marriage Act) in the U.S. We sat and cried by ourselves. No one to share our joy with as we witnessed the slow roll towards equality in our home country. Fast forward to July 2015 when the U.S. Supreme Court overturned bans against same-sex marriage nationwide in the U.S., hashtags of #lovewins and #vietnamnext exploded across Vietnamese social media.

In the recent years, I have watched the shifts in the political landscape in Vietnam from afar, and it has been incredibly emotional. In 2012, one of the initial precursors to the contemporary LGBTQ movement was a flash mob organized to happen simultaneously in Hanoi and Ho Chi Minh City (formerly Saigon). I was moved to tears watching the LGBTQ flash mobs in Hanoi and Saigon. It was so compelling to see young Vietnamese LGBTQ people out and proud - waving rainbow flags. Here were all the people I had been looking for since I came out over 20 years ago. This movement of LGBTQ Vietnamese is incredibly young, and seems to be driven by young people under the age of 20 - young enough to be my own children! It gives me enormous pride to watch these LGBTQ developments in Vietnam. There are many new LGBTQ organizations that have sprung up in the past few years since I returned from Vietnam. Some of the organizations include Viet Pride and ICS and iSEE PFLAG and most recently Queer Forever. In 2013, the first ever Pride events took place in Vietnam, a small gathering and parade on motorbikes in both Saigon and Hanoi, now an annual event with elaborate shows and performances.

I am looking forward to meeting LGBTQ Vietnamese in Hanoi and creating a space for visibility through digital media. While I know the recent enfranchisement of LGBTQ offers some legal protections, it is far from acceptance. As an artist, I want to offer a platform for the stories of Vietnamese LGBTQ in this time of change. I want to document their stories. I want to create a space for these young people to tell their own stories, and create visibility, which in early stages of LGBTQ movements is essential and vital to success of the transformation, LGBTQ people, and all people, in Vietnam and beyond.