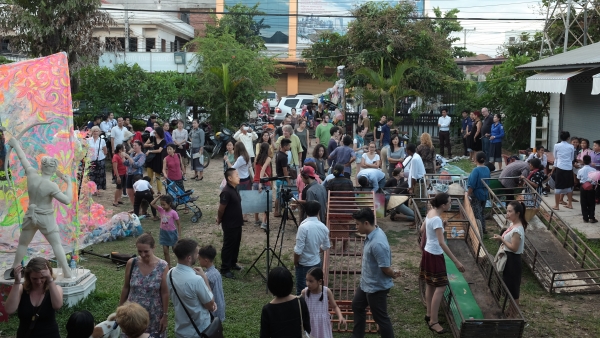 A few hours after landing in Vientiane, I attended an exhibition called Turning Points at Ban Naxay Gallery that featured the work of three Lao artists. There was some tension in the air that night. I learned from one of the artists that because of the nontraditional aspects and themes of the work, there were fears that the government might not let the show happen. One of the artists started talking to me about an artwork he had made last year that spoke out against deforestation in Laos.  He quickly covered his mouth, looked around and said, “Shh, we can’t talk about that stuff here.” I knew immediately that these were the kind of artists I wanted to work with. One of the artists in the show would eventually be a small grant recipient for the Laos Arts Incubator, while another would become my translator and project manager.

I spent my first few days driving the city on my motorbike and getting oriented.  I noticed immediately that not only was there very little street art, there were hardly any public murals at all. I came to learn later that there weren’t any contemporary public murals painted by Lao artists in the entire city. While the temples are filled with incredible murals and some private businesses have smaller ones, a mural on a truly public wall didn’t exist. I originally planned to teach a workshop that explored alternative street art techniques like reverse graffiti & hydrophobic stenciling; however, I realized that the most radical thing we could do in Laos would be to design and paint a mural in public for everyone to see.

In the U.S., young artists are encouraged to express themselves freely. It is common practice for teachers and mentors to push students to break rules and create new ones in the name of moving into uncharted territory with the work. Artists in Laos are expected to stay within the narrow confines of the art traditions deemed acceptable by their teachers. While the painting students here have mastered the formulaic structure of traditional landscape painting, portraiture and the still life. However, without that nudge to expand the work into fresh visual terrain, much of the artwork remains static. What is left is a generation of technically gifted artists who are hungry to say something new with their work.

“What can we make in twenty five days?” This is what I asked the artists at the Laos Art Incubator introduction lecture. What took place next was a citywide collaboration of over one hundred local artists and community members who brought their talent, passion and energy together to create something powerful and beautiful. Through visual art, performance and community-based activism, the projects engaged the imagination of children and adults alike as we brought attention some of the most important environmental issues impacting local communities today.

After the small grants were awarded each group had three weeks to take their proposals and bring them to life. The projects evolved organically, each one taking twists and turns along the way.

Toh Tokabonglao and his Khao Niew Lao puppet group spent much of their time at the Dong Paleap Library outside of the city center. The library is a safe place where children from poor families can come and play and make arts and crafts. Toh and his team held a four-day workshop with fifteen children where they discussed the importance of recycling. They walked around the neighborhood collecting discarded plastic bottles and other reusable waste. Under the guidance of Khao Niew Lao the children cut, glued and strapped the plastic together in creative ways to make snakes, pigs, and other animals that they would eventually turn into puppets. The last part of the workshop was spent rehearsing the puppet show that they would perform together at the exhibition the following week. 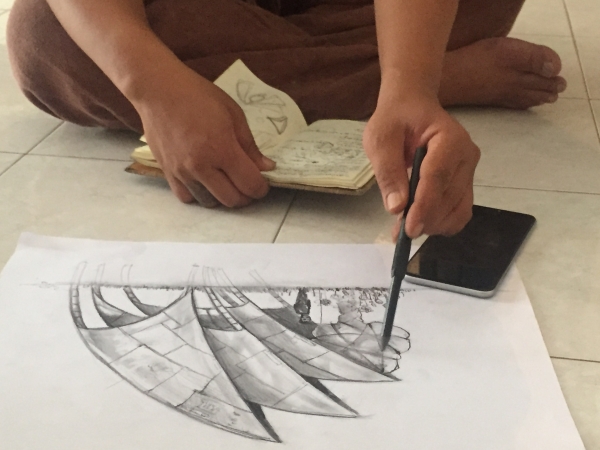 Meanwhile on the other side of Vientiane,

Bounpaul Photyzan was busy designing and constructing Plastic City with his students from the National Institute of Laos Fine Arts. The installation went through several design phases as he experimented with materials and various structural plans. Bounpaul and his team often worked into the early hours of the morning painting and constructing the piece. Several times throughout the project the team had to seek shelter from rainstorms that swept over the city with no warning. 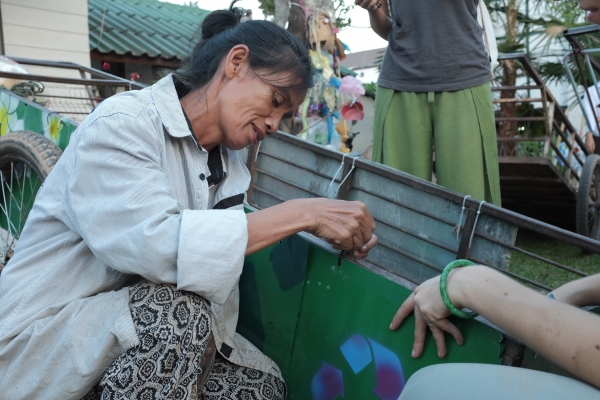 The goal of Green Vientiane’s Recycle Khoi (Recycle Me) cart project was to celebrate the men and women that collect discarded plastic and other recyclable waste by decorating the carts they push around the city. Their team interviewed the cart owners and had artists create personalized designs for each cart. By placing a spotlight on the trash collectors themselves, the beautified carts encourage people make the connection between the waste they create and what happens to it after it has been thrown away. 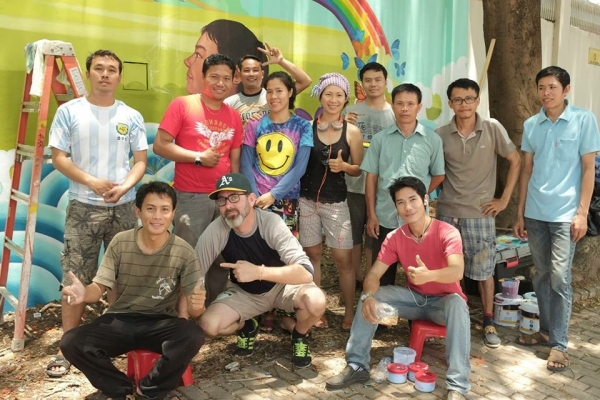 I concentrated my efforts on working with the Color of Future Mural Collective to paint the sixty-foot mural on the wall outside of the old U.S. Embassy. Once we broke ground we had less than two weeks to complete it, and were faced with the harshest season of the weather as temperatures reached one hundred degrees during the day with big rain storms looming every night. During the first few days of the project we invited children from the community to come help paint. The mural site is on a busy road in the middle of the city and parents would actually drive up on their motorbikes and their kids would hop off and start painting. We saw lots of big smiles and colorful messes during those days. The professionals took over after that and clocked twelve-hour days in the heat to finish the mural. Excitement grew as the image became more intricate and refined with each passing day. I have been painting murals for twenty years and this is one of the most talented groups of artists that I have ever worked with. We completed the mural a day before the exhibition. The sense of pride and accomplishment was tangible as we wrote each artist’s name on the wall next to the mural. The Color of Future Mural Collective logo is stamped next to the names along with a phone number, as they are officially open for business. 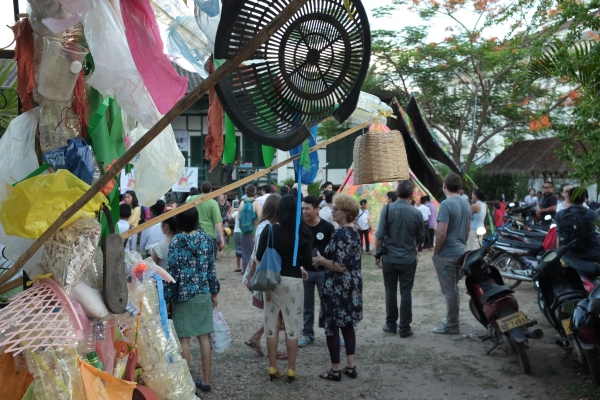 With the ever-present present threat of a big rainstorm, everyone was cautiously optimistic as we prepared for the final exhibition. A big storm ripped through the city the night before, however, there was magic in the air that evening as the clouds parted and blessed the event with clear skies. Ban Naxay Gallery was a fitting site for the festivities as this was my first stop upon my arrival in Vientiane almost one month ago. Over one hundred people from the Vientiane community attended the event! Green Vientiane made their final preparations for the carts on site and even enlisted the assistance of the students from the National Institute of Laos Fine Arts. Children, families and artists gathered in anticipation for the Khao Niew Lao performance with the children from Dong Palaep Library. They watched in awe as the recycled plastic puppets came to life before their eyes and delivered a powerful message about the importance of taking care of the environment. The sun had set as the performance came to an end and Plastic City lit up the courtyard. The architectural sails of the piece engulfed a neon plastic garden of trees and flowers and filled the courtyard with an otherworldly glow. Children and adults danced in and around the structure late into the night, smiling, laughing and posing for pictures. While the celebration marked the end of the Laos Arts Incubator, seeds of change have been planted amongst the artists, the children and the community in this vibrant riverside city.

Where are they now? 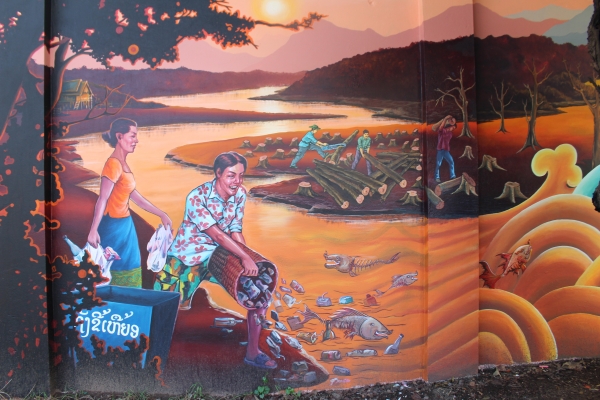 The Color of Future Mural Collective is currently designing its second mural to be painted on the front of the new campus of the National Institute of Laos Fine Arts. They will begin painting next month. 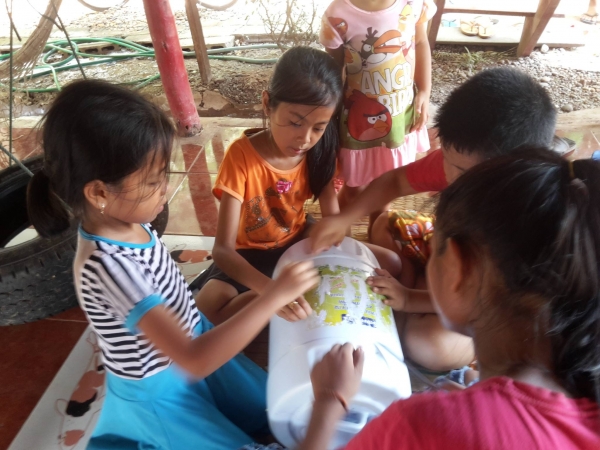 Khao Niew Lao will use the elements from their collaboration with the children as the foundation for a new performance to be shown at an International Performance Festival held in Vientiane in January ’16. 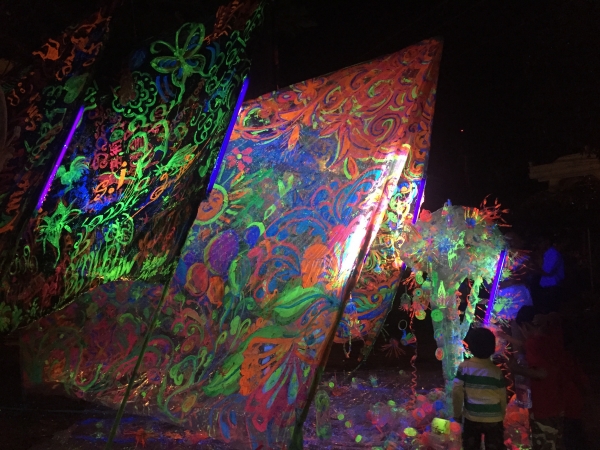 is currently in discussions with local institutions to find a permanent home for Plastic City. 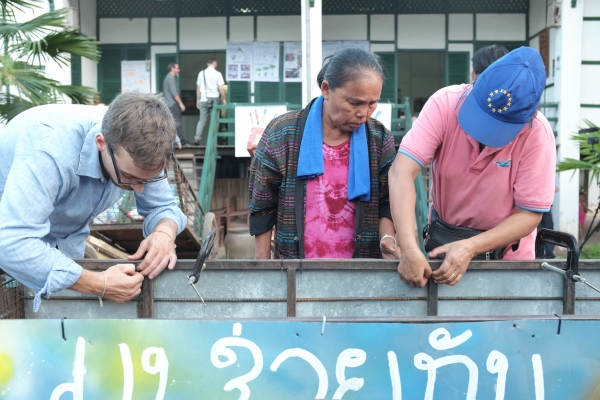 Green Vientiane is planning a citywide Adopt-a-Cart initiative in Vientiane where local schools and businesses can sponsor the decoration of recycling carts around the city.