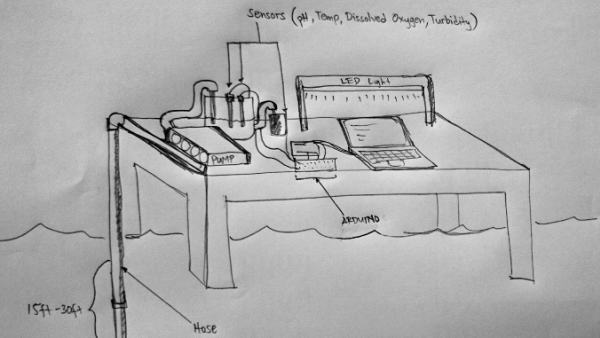 The team perceived the problem of the stakeholders in Banilad regarding traditional fish searching during the community immersion on the second day of the workshop. The activities include area project reconnaissance, interview with concerned stakeholders and locals, and formulation of solution through art technology using indigenous materials and garbage.  This article further discusses the progress of the Sea Sense team from the perception of the problem to the inception of the project from April 16 to 29, 2016. Project planning, development, and simulation were done at the Waterspace Laboratory in Foundation University while actual testing of the partially completed project is conducted in the BOAT Lab at Banilad Marine Sanctuary.

The primary stakeholders are the fishermen and beneficiaries of the target community. Tasks were divided among the members of the Sea Sense team. Al Diego designed the circuit diagram and sensor programming. Moreover, Jeffrey Rivera did the configuration for automatic seawater sample suction and draining of sample. On the other hand, Geraldine Quiñones made the seawater data analysis and processing while Dae Habalo integrated science and technology to the project.

This project started with a week-long workshop and team building with Andrew Quitmeyer as the facilitator. After that, the team developed a prototype and presented the project idea on April 23, 2016, at the James B. Herring AVR. The presentation was attended by a representative from U.S. Embassy, Bantay-dagat president, wife of fishermen from Banilad, and Computer Studies and performing arts students. Feedback during the presentation was used to enhance the project. The group is motivated to complete the project based on the extraordinary reaction of the audience and acceptability of the project by the U.S. Embassy representative.

Andrew Quitmeyer then presented the team deliverables and project timeline. After which the group did the simulation, development and testing of the automatic multisensor seawater quality monitoring project considering the inputs of Andrew Quitmeyer.

The team performed the testing process in the Waterspace laboratory and actual sampling area in Banilad Marine Sanctuary. Initially, the technology is tested using fresh water sample then implemented in sea water. After the testing process, the team purchased materials and started coding the sensors for sea water sample detection using copper wire.

The team celebrates for the successful completion of the sample seawater extraction, detection, coding, and simulation in Banilad Marine Sanctuary. At the moment, Sea Sense team is preparing for the May 1 project exhibition at the Negros Oriental Convention Center.

This is the second week of the Waterspace Incubator workshop. On May 1, Foundation University was invited by the Technical Education and Skills Development Authority (TESDA) to showcase state of the art programs. The University approved the participation of WaterSpace and Sea Sense was among nearly 20 exhibitors showcasing the work in progress at the Convention Center.

Sea Sense is practically busy preparing for the public exhibition and launching of BOAT Lab at the Banilad Marine Sanctuary on May 7, 2016.  Before the big day, the team acquired additional materials for the research and final exhibition such as portable divider, hose, and heat shrink wire connector. Al and Jeffrey assembled the PVC plumbing pipe and attached the frame to the experiment table for seawater extraction and draining procedures. Geraldine and Dae, on the other hand, completed the remaining deliverables (logo, how-tos, print documentation, poster) with the help of Jeffrey and a BSIT alumnus.

The team made several attempts to test the dosing pump, sensing of the seawater sample and setting up of the exhibit in the covered portion of the BOAT Lab at Banilad Marine Sanctuary.

We finally extracted the sensor reading and display the value using grove LCD. The figure below shows the display of pH reading.

On June 2, we had visitors from DOST, PCAARD team, who were interested to look at the project and visit the Banilad BOAT Lab site.

a)    Malfunctioned LED removed from the container

b)   New LED is tested before de-doming

d)   Attach and test de-domed LED to the container

Also, we started programming to extract reading from turbidity sensor.