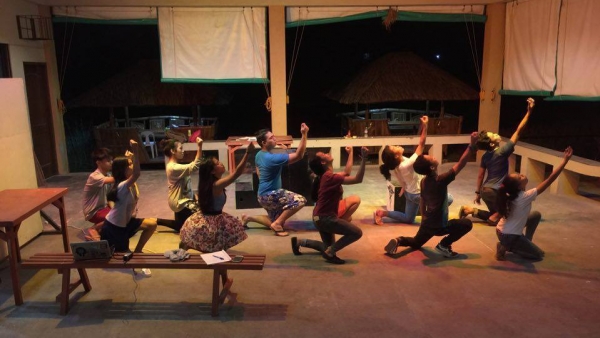 Due to the environmental pollution tampering our mother Earth that is spreading across the world nowadays, team TAPOK (Tinguha Alang sa Pagpalapnag sa Obligasyong pang Kalikupan) have come up with an idea of spreading environmental awareness with the use of theater and arts in expressing perspectives. Furthermore, conjoining technology as a tool in redeeming our mother Earth into a more satisfying environment and a nourishing habitat, and the arts became a challenge and a necessity. Team TAPOK decided to present a theater play entitled LISO NI LAUM wherein the concerns in our community regarding water, land and air pollution is given an emphasis.

The team's project of promoting awareness through a creative performance will highlight on how we abused and misused our natural resources and on how we can reduce the environmental impacts from our day to day activities from simple ways to bigger actions. In the same manner, team TAPOK will be using costumes, sets, and props from scraps to illustrate our passion and advocacy.

In the first five days of our rehearsal, we felt the challenge that says “we cannot do it” because most of the members of the project are first timers when it comes to theater arts and we all have different ideas, that makes everything change from time to time.

However, as we go along the process and met people with theater arts experiences, we grew in mind and in spirit that inspires us to finish and bring this project on stage and to people that will definitely give the ribbon for our project’s success — spreading awareness to the community.

What do we like most in this project? Through team work, we have experienced how fun it is to co-work with young and artistic minds for our story. And how we creatively turned trash into costumes with Andrew Quitmeyer’s shared knowledge. Just as people should act with our Earth’s intensifying cry.

Team TAPOK took only two (2) weeks to prepare for our play entitled “Liso ni Laum” (Seed of Hope). Each of the individuals did their best during their rehearsals. Will the given two weeks be enough for them to present a jaw-dropping output?

During the project making, team TAPOK have been busy mounting our script. Our script was actually already composed during the workshop conducted by YATTA (Youth Advocates Through Theater Arts) but it became one of their struggles because of the often changes and additional ideas of some individuals are added. In the end, the script was finally made. Even though the actors for the play were first timers in acting they were good at it. The performers of this production were very excited because everyone contributed during the script making and some of them will perform on the beach for the first time.

The performers were in charge to their own costumes and props. To lessen the expenses, they borrowed from the YATTA’s properties like some of the props and costumes of the past plays. They also used recycle materials like disks, leaves, ribbons and bottle caps for their headdresses.

The team encountered some problems with time management, because some of the performers were often late during practices and sometimes they also do things not related to the play. We also struggled with movements, levels, blocking and dialogue, because they often forget their parts.

In regards with the sound effects, Liza Marie Ragusta was the stage manager at the same time that she was the sound technician. The sound effects were cool and hilarious. It made the audience guffaw and it added essence to the play.

Rojan Talita, their amateur director did a great job in directing and guiding the performers during the rehearsals.

Team TAPOK also have a song and dance number for the finale of the play. Some of their kapatids (siblings) from YATTA helped them with the vocalization for their song.

A cast member of the play (Courtesy of Team Tapok)

Before the final exhibit the casts of the play prepared theirselves for the presentation. All of them looked good especially Basmuk (The Garbage Monster) who looked terrifying and perilous. Before the performance, the team prayed together for God’s blessings and guidance of their final exhibit.

During the Exhibition Day, May 7, 2016, Team TAPOK presented their play at Banilad Marine Sanctuary. Team TAPOK’s crew were excited and nervous at the same time on how the play would go. There were difficulties before the play started, one was the stage is too small, another was the lights. The stage during the exhibition day was too small than the one they practiced with, so as performers they have no choice but to go on with the show and adjust with changes. The lights used were of the same color. Those were just minor issues but the show must go on.

The play went well, but there were minor issues. First was a microphone always falls down, every time a huge bang occurs in the stage. Second was the cast was having a hard time adjusting on the small stage, they are afraid to move around because the stage’s floor isn’t level. Third was on their final act where they sang with a guitar but the guitar was late making the song lousy, but after a few lines the guitarist caught up with the singers.  Besides all that, the show went on like it didn’t happened. They had impromptu make-ups for their casts, which turned out awesome.

Team TAPOK received a well sounded ovation from crowd. With all the difficulties they had, and having 2 weeks to prepare for a play, Team TAPOK did a good job. A lot of people appreciated their work. All the time and effort spent to make play was indeed worth it. Showing people the effects of their actions to nature, and the consequences it brings. Sharing knowledge of the environment with people and giving them ideas on how to care for it. The cast had a great time with the show and so did the crowd. With every member of team TAPOK working together and some other support from other teams, everything in the plan was made to be. To sum everything up all of the teams did a very good job on that day. Everyone had fun, with the exhibits and the play. Everyone enjoyed the snacks served. Together with Team Viz, Sea Sense, F.U.P.P.I., and TAPOK the exhibit day ended well. Smiles were everywhere because of the great things they’ve done for the environment.

Team TAPOK will have their second show on 26th of May 2016. This will be held at Dumaguete City’s dumpsite, situated at Barangay Candau-ay.

Team TAPOK took no rest in creating and spreading environmental awareness to the people of Dumaguete City as they staged their second performance of the play “Liso ni Laum”.

Last May 26, 2016 at exactly three in the afternoon, Team Tapok performed in the Dumaguete dumpsite, Candau-ay Dumaguete City, a place where all the garbage in the city are being delivered and deposited to decompose, with relatively a handful of locals residing in the area, some of them were scavengers in the site. The performance was part of the KAMPBATAAN 2016, a camp organized by the Youth Council of the Consuelo Foundation Life Skills plus Program through the Youth Advocates Through Theater Arts. The Project Manager of the program coordinated with the barangay’s councilor for the venue and other logistical needs.

As part of the team’s goal to spread awareness, the performance’ venue makes it more appropriate as it was surrounded by mountains of garbage, as some were already occupying the near vacant lot. The people who watched were so eager to see what will happen next as was observed on their faces as they were educated to the morals of the story. The play also fits the audience as most of them were scavengers and some were government officials who implements the law.

The Barangay Councilor was so touched by the story that the team was once again invited to perform on the feast of barangay Candau-ay.

Today, the team seeks for more partnerships of the LGU’s and NGO’s to create and spread awareness to more people, within or outside the city.