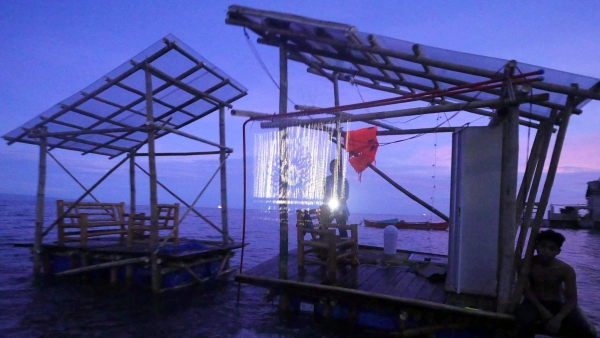 With increasing pollution levels, it is essential for our team to find new ways to psychologically approach a new medium pertaining to self awareness in relation to the environment. The aim for this project is, (1) to get people involved by sparking their interest, (2) to relay data from all the information we have regarding the environment and (3) to introduce technology and art as a way of emotionally connecting with people.

Our project has 3 different approaches and designs. The main project is to create a 3D projection screen that gives out a hologram like output with the use of fog and, of course, for that we need a machine that creates a fog. It's basically much more convenient to just buy a fog machine but locally we can’t find one and It’s much more “fun” and we get to experience and encounter different problems in building one which gives us more insight in the world of technology. We also needed to build a platform to direct the airflow of the fog in order to make the projection screen.

There is only one problem with the main project and that is the wind factor that might blow away the projection screen so came up with some backup plans which also serve as an output to give out data to people.

Two of the side projects is (1) to manipulate addressable LED strips that functions as an output from the inputs of the different sensors that we have and creating a fun and amazing concepts to how it would blink or like what colors to show.and also (2) the making the of the waterfall curtain that can also serve as a projection screen. We also attach an LED strip into the top of the curtain’s pipe to give out beautiful light reflections.

We hope our approach can attract people to see for themselves and spark the interest of the local people. Some might find it new and very intriguing, and at the same time we would also be letting them know what is happening in the environment with the use of the projection screen. This may convince them to get involved in making a difference and make the world a better place for generations to come.

PVC pipe (or water screen) installation (courtesy  of  Team Viz)
Minimal problems were encountered in mounting the water projection screen. When mounted we observed that the BOAT Lab was not leveled properly, having the water flow only to one side. Our solution to that was to add another component in the PVC Pipe establishing another one in the middle, the intersection point between the current of the water was placed in the middle of the new established PVC pipe, distributing the water equally between two sides.

Although the water projection screen was okay, a lot of problems was again encountered in the fog machine. The unexpected thing was the ceramic around the heating element was broken due to excessive moisture from the fog. So we tried to figure out another alternative to prevent that but due to a small timeframe we just decided to buy another tea kettle. And just to be safe we bought two.

Week 2 of the Waterspace Project

May 7, 2016, Exhibition day for the Waterspace teams. There is a huge pressure on us (Team Viz) because we had to setup everything on the exhibition day. We started setting up our projects at around 9 am, and we have 10 hours to set everything up. On the last minute our fog machine broke but with Team Viz’s magic they fixed it right away. We made everything work on that day.

Before the end of May, our team coordinated with Dolf Andringa a marine biologist and we thought of expanding the community to get as many students involved since it would be the start of class soon, and since all of this is about learning to collaborate each and every one’s ideas. The Team Viz Initiative does not only mean visualizing all the creative ideas that comes to mind but to actually implement it. We do not only envision a community of greater and rich culture but we would also like to make that happen, and personally I plan to do so.

In regards with the projects, Team Viz has already initiated the Glowing Buoy project and we actually experimented in mixing the silicone with neodymium powder and applied it with an expendable styrofoam ball and waited for the night to see if it would work. After the experiment we concluded that though it still glows in the dark, due to its transparent attribute of the silicone and because of the neodymium powder doesn’t highlight it colorful property at day, it seems like it's just an ordinary styrofoam ball.

So we are planning to use acrylic paint or any paint that is not toxic and collaborate with artists to paint using the buoy as the canvas and afterwards apply glowing silicone to make it look awesome at night.

Glowing Buoy experimentation (Courtesy  of  Team Viz)
SHARE:
Share on TwitterShare on FacebookShare on PinterestShare on LinkedInShare on Email