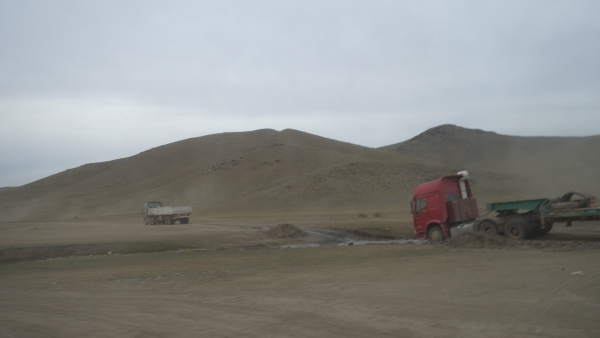 “Why Mongolia?” Zaya asks me, as we walk through patches of evergreen trees, near the ruins of a Buddhist monastery on the outskirts of Ulaanbaatar.

In many ways it's obvious, why Mongolia might be the perfect place for a designer to work at the intersection of art, design and technology with a community focus. It's a country full of contradictions with a rich cultural legacy, and the growing pains it faces are extraordinarily complex, especially when confronted with its past.

Mongolia might present images in people's minds of Genghis Khan, fierce warriors or nomadic herders, but the place it is today has incredible nuance. Deemed a “middle income” country by the World Bank, it is also a so-called "developing country", one that faces the resource curse – with billions of dollars of untapped mineral wealth all the while navigating a democratic government that has been in place since the 1990s and the environmental impacts of mining that severely affect the country's other major industry: nomadic pastoralism.

Ulaanbaatar, Mongolia's capital embodies many of these contradictions. On my visit, Beijing Street was entirely under construction, leaving residents to walk alongside tractors and construction equipment. In the city center, a Louis Vuitton and luxury hotel loomed large. I was also fortunate enough to see the work of Les Joynes during my visit, who collaborated with Mohanik and local Mongolian artists to create a performance at the Zanazabar Art Museum, replete with a ger or circular yurt structure located inside the museum and combination of old, new, and extremely contemporary art. Meanwhile, the fall air was already smoggy and polluted from the power plants put in by the Soviets and the small household, coal-burning stoves being used in the ger districts.

Before the democratic revolution in the 1990s, during the last days of Soviet influence, only 26.8 percent of Mongolia's population lived in Ulaanbaatar; by 2010, 45 percent of the country's population lived in UB according to the Asia Foundation. Out of this figure, more than half of the city lives in ger districts, areas that have been described by a few organizations as “shantytowns” or “slums”. Many of the districts lack access to essential public services. However, unlike slums, by Mongolian land law, the ger district residents own the land that they have claimed, leaving the Ulaanbaatar city government to negotiate with each household on relocation on a case-by-case basis.

Yet on this day, in the outskirts of Ulaanbaatar, the skies are clear and we are away from UB's incessant honking, traffic, coal-burning and exhaust fumes. There are few sounds of airplanes overhead and it is so quiet that you can hear a wall of wind crash through patches of evergreen trees. Vultures circle the top of the mountain, surrounding a dead animal somewhere in the rocks.

I'm with Zaya, a young video artist who lives in Ulaanbaatar and whose husband's work is up at 976 Gallery, the partner organization for the American Arts Incubator project. We are about an hour outside of Ulaanbaatar, having made it to the ruins despite a major road closure. Instead we drove as cars and shipping trucks have clearly driven for many times before – on bumping informal roads that crisscross the grassland.

The monastery itself is a reminder of all the intricacies that are part of Mongolian history – formerly home to llamas and monks, the monastery was destroyed in the 1930's as part of the Soviet purges on religion and the ruins are now preserved with a tourist ger camp at the foot of the hill. Two Americans pass us on dirt bikes during our visit, careening down the hill with athletic aplomb.

As I've learned, it is more difficult to answer questions that one innately knows the answer to, rather than the questions based on pure rationalization. The question of “Why Mongolia?” can only be answered and understood upon being there and engaging all five senses fully. To understand, one must be there.

Fortunately, I was allowed a few days reentry into this question, meeting with folks at the US Embassy in Mongolia and the partner organization at 976 Gallery. Much of it was a whirlwind but what made the trip markedly exciting was everything the meetings and conversations with people reiterated – for all the promises of technological advancement or innovative futures, the platforms and websites that would revolutionize our world, what transcended words and boundaries were still the very social networks and ties created by culture, imagination and arts. A better question may be, what marks a culture and what shapes a culture?