It’s hard to believe that a year ago I was just beginning to think about a project in Mongolia. There’s a lot of built up anticipation in these next two weeks before I leave, much of it to do with my long-standing interest in Mongolia…

Coming from regional planning, I became fascinated with Mongolia because of its outward contradictions: a highly-networked yet nomadic society, its informal urban planning, its status as a developing country yet without some of what you might see/imagine as a “developing” country. The complexities of urbanism in Mongolia were what fascinated me most: the physical spaces carved out are as much the result of larger environmental and economic systems as they are historic and ideological ones.

What this boils down to is the compelling and somewhat daunting project I plan to develop in Mongolia: The Nomadic Mapping Collective. The challenges that face Ulaan Baatar, Mongolia are not necessarily unique, and in many ways are endemic to many “remote” places. Remote places are rendered remote either by physical inaccessibility, or ever increasingly by the virtual inaccessibility of being "off" the map.

Looking at the Nepal earthquakes and the rush towards virtual mapping as a means to affect physical relief efforts is a reminder – the impactful actionability of data. So much now depends on a map as instructions. Not a set of neutral data, but the instructions and the platform that drives physical actions, the articulation of space. One of the guiding thoughts behind the Nomadic Mapping Collective is less a virtual scan, remotely, but performing "ground truthing" – having citizens of a place articulate their city. "In a classic work, The Image of the City, Kevin Lynch taught us that the alienated city is above all a space in which peole are unable to map (in their minds) either their own positions or the ubran totality in which they find themselves..." writes Frederic Jameson.

So, in a place like Ulaan Baatar, there is much to be learned about maps, about data, about power and logistics. About the forces of development and control that often play at odds with local culture or even preservation. About power and who owns the data, who maps, who has access to knowledge and high resolution digital imagery. About land ownership and documentation.

Or, in the words of the incomparable Etel Adnan: "A map is not about places but about direction. It is to take you to places. It is a dynamic circus. I just wanted to emphasize the nomadic quality of the map."

In these next few weeks, I’m excited for the formation of The Nomadic Mapping Collective, and for the Collective to explore map-making as a tool of social and technological entrepreneurship. Inspired by art as service and forms of contracts as art, the rules of the collective range from offering “paid” services that are paid with using labor, and using the preciousness of limited artist editions (signed, sealed) as documentation for land registration.

There’s a lot of work to be done, and a lot of material to cover. I’ve been carefully going through equipment and testing out some tools, ranging from basic environmental sensors to nifty little drones that capture video. I’m also printing maps for the workshop, making booklets and preparing the artists editions, and preparing for participants to be tour guides. Hopefully as you follow along in this blog, you’ll be able to see the incredible city of UB in virtual space for yourself. 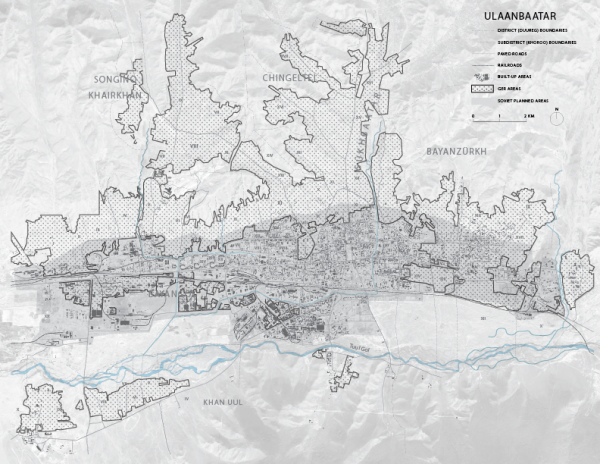 Ulaanbaatar map, adapted from Managing Urban Expansion in Mongolia, World Bank 2010
SHARE:
Share on TwitterShare on FacebookShare on PinterestShare on LinkedInShare on Email