Reflections on the Augmentation of Public Memory

The Music Concourse in San Francisco's Golden Gate Park comes alive with a Saturday crowd — people lining up for the SkyStar Observation Wheel, out for a stroll through the Japanese Tea Garden, biking past on their way to Ocean Beach. Amidst the bustle on a sunny day in early April, several people can be seen standing notably still, pointing their phones towards the statues and monuments distributed around the courtyard. Mimicking the poise of the statues before them, these stoic figures looked inquisitively at the screens in their hands, scanning their surroundings with concentration and curiosity.

The mysterious sights and sounds captivating these observers are the artistic interventions of seven local artists who had crafted augmented reality (AR) artworks responding to a selection of public monuments in the Music Concourse. These interventions were created during ZERO1’s Marble and Media: Digital Activations of Public Memory, a six-week laboratory led by artists Cheyenne Concepcion and Camila Magrane that culminated in the creation of an AR walking tour. The lab endeavored to provoke thought and encourage reflection on the role of monuments as venerated objects of public memory. 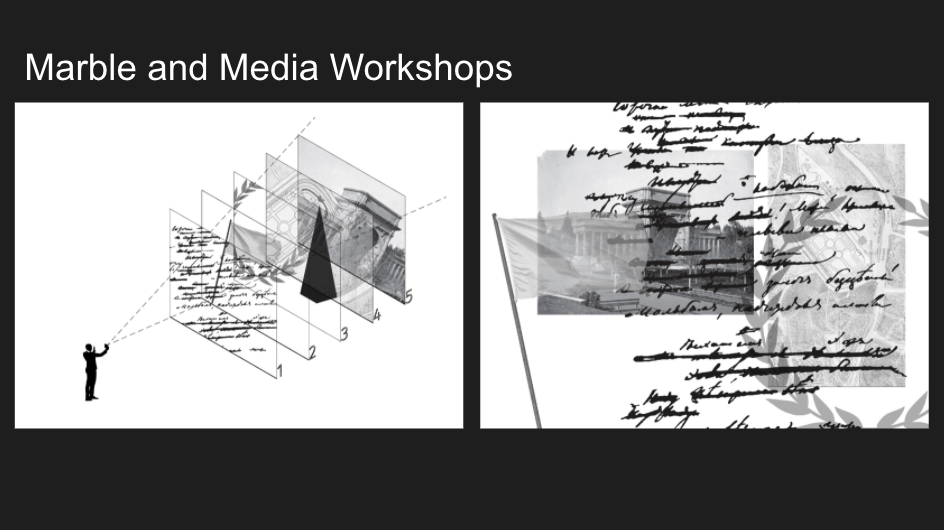 In recent years, heated national discourse around monuments has sparked a collective assessment of our shared history. Public outcry demanding the removal of statues honoring racist Confederate generals has grown into a broader national reckoning with celebrated figures who, at worst, represent oppression across American history, and at best, represent only a part of the story.

During the summer of 2020, in the wake of the police killing of George Floyd, as an uprising for racial justice swept across the country, the Music Concourse became a site of righteous protest. Activists gathered to remove the statues of Francis Scott Key, Ulysses S. Grant, and Junipero Serra for their complicity with the racist practices of their day. Key owned slaves, Grant inherited a slave (who he then freed, it should be noted), while Serra forced conversions and banned indigenous cultural practices. These three figures (all white men) are just a sampling of the characters who populate our official public memory, each requiring nuanced evaluation to understand the role they played in our history. With these statues now gone, we’re prompted to imagine — what might take their place? And what are we to make of the rest of our monuments, even those that were untouched by last year’s protests?

At ZERO1, we propose that artists have an important role to play in this reimagining. The prototyped artworks from Marble and Media surface untold stories about the park itself, and give deeper meaning to the figures represented by these revered objects in metal and stone. They ask us to drop in and feel out a sense of place in space and time. The heavily-irrigated bit of landscaping that is Golden Gate Park, located on a strip of land that was once sand dunes stewarded by the Ohlone people, and known in the 19th century as the “Outside Lands,” becomes a stage for the telling of our many shared stories.

Several works draw our attention to the natural world and a time before the arrival of European settlers. Jeff Enlow’s American Bison reproduces the over-hunted majestic beast of the plains as a reminder of its near extinction by settlers and current restoration by indigenous nations. We are introduced to several plant and animal heroes of natural history in Mae Ross’ This Land before it was “Found,” honoring the pre-colonial beings who inhabited this place long before settlers arrived. 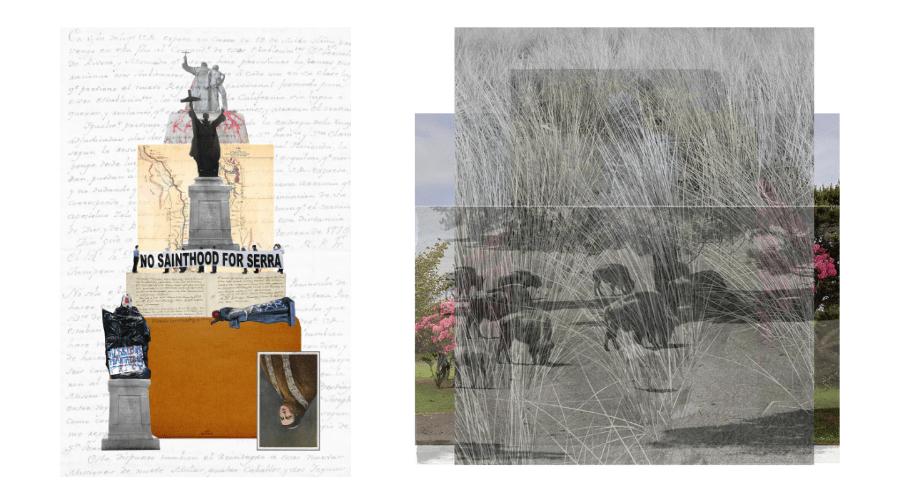 Through the artists’ eyes, we are invited to see the familiar anew. With Verdi, Shrouded, Kim Nucci animates the Guiseppi Verdi monument with sound emphasizing the monument’s connection to Italian nationalist history and the forcible relocation of Italians during WWII. Hannah Scott proposes a Speculative History that captures multiple layers of truth by overlaying a matrix of contextual knowledge upon the statue of General Pershing. Paola de la Calle reclaims the pedestal where Junipero Serra once stood as a Monument to the Movement that has demanded reconsideration of problematic historic “heroes.” And with Plant Your Seeds, Hena Muttreja fittingly honors John McLaren, known for his dislike of monuments, by obscuring his bronze form with the thing he loved most, plants.

Creative response to the architecture of dominant culture can also release the tension built into these structures, opening up a space for reinvention. Caleb Lightfoot’s Schema for a Post-Historical Monument deconstructs the neoclassical pedestal and columns that once held the figure of Francis Scott Key and suspends the component parts for examination in an act of critical archeology.

The tool of AR is particularly well-suited to these experiments in public space. While the technology remains somewhat glitchy and sometimes inaccessible, its potential was on full display during the Marble and Media AR Walking Tour. As the name suggests, it can augment what already exists in our physical world by adding a layer of image or sound. It can make an ephemeral mark on the world that literally disappears when you want it gone. It provides a canvas for experimentation, perhaps to aid planning towards the eventual construction of a permanent structure. AR is a tool for transforming a place without leaving a trace.

While the San Francisco Arts Commission conducts a review of monuments in the City collection and convenes a Monuments and Memorials Advisory Committee, an official process that will take well over a year, there is a timely opportunity for artists to enrich the discourse and expand our thinking around memorialization right now. The artists of Marble and Media heeded that call, and we hope many more will follow.

Marble and Media: Digital Activations of Public Memory is a ZERO1 creative laboratory co-led by artists Cheyenne Concepcion and Camila Magrane in collaboration with New Monuments Taskforce and emerging artists from across the Bay Area which utilizes new media to explore monuments and memorialization in public space.